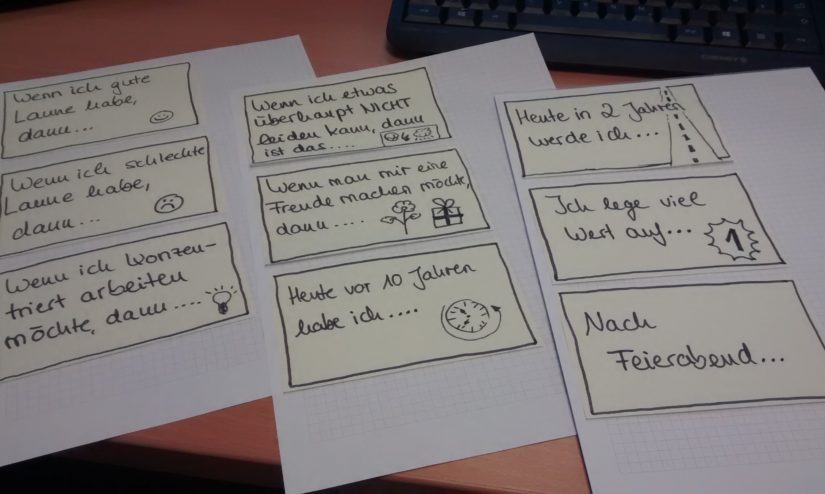 Recently it was retrospective time again. My team (I also wrote about the “Zombie” retrospective format and the Amazon/Movie Review retrospective activity there) has now been “officially” merged with another development team. The other team consists of 7 developers (two working from remote) and one defacto-teamlead. I have been in charge of facilitating this other team’s recent retrospectives as an external facilitator since they decided to revive retrospectives earlier this year.

A couple of weeks ago, we moved to one huge shared office space. Now we had our first retrospective as the new “big” team. Having 15+ participants and the new team setting given, I decided to put this retro’s focus more on teaming-up instead of reflecting daily work topics.

Early in July I saw an impressive retro idea from Matthias Mohme on Twitter and now I decided to try this with my team. People are not completely new to each other but some know each other better than others. Former retrospective also revealed that we are very good at discussing work topics but the “soft” topics like openess, feedback and trust are areas to really advance and improve further.

How I facilitated “the 9 questions”

While creating the post-its with the 9 questions (or more precise: half-sentences that needed to be completed) I began wondering how this format actually is to be facilitated as I just had the photo from Matthias. So I thought about either presenting all 9 post-its in advance versus revealing them one-by-one. Finally I decided to present them in batches of 3-2-2-2.

It was fun and seemed very short and felt refreshing. People were constantly moving which was definetly a plus. The whole format took round about 30-40 minutes.
A positive aspect concerning openess was that people felt encouraged to take part because the half-sentences were straightforward to complete for them. So it was obvious what needed to be done which made it easy to handle. Of course this is way better than just being asked to “be more open” (but how?). Some people found the exercise a bit challanging as it urged everybody to be a bit more open than “usual” or just posting empty stickies in a row (and nobody wanted to do that for sure).
People also liked the self-reflection aspect of the exercise; one idea was to encourage some similarly structured feedback from the colleagues for the next time (somehow).

At a glance it really was a success & I want to thank Matthias for sharing this cool idea with the agile tribe.